What meetings should my startup be having? 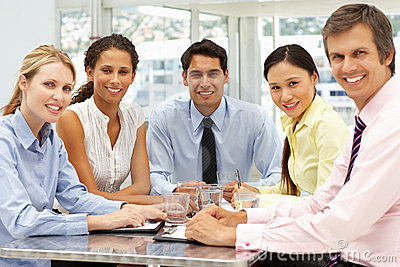 I tried to find the fugliest stock photo of a meeting. Did I win?

One of the issues I see in early stage startups when they get beyond “two people in a garage” is that they don’t consider how important synchronous information transmission can be for making sure people are on the same page. You’ve got one, two, three folks who largely share a brain, and are constantly sharing information - so why would need to create structure around this sharing, right?

Further, because they’re constantly pushing, and always on, they don’t consider the importance of cadenced checkpoints to measure the progress against their goals, and reevaluate that their previously agreed goals should continue to be their goals. You resist doing this when you have a huge pile of wood to chop, and instead just chop and chop and chop.

Lastly, because “meetings” feel like a big company thing, and man, we ain’t got time for that, group chat, email, and anything dear god other than a meeting, will stand in, instead. Startups will actively avoid having recurring meetings, thinking that they are inherently problematic (rather than just being poorly done at the companies they previously worked at.)

But when you get beyond three people sharing a brain, there is definitely a need for structured information sharing and cadenced checkpoints for evaluation and reflections. Not executing on that leads to serious opportunity costs, confusion, and assorted brain damage.

For all of these reasons, I see early stage, and even mid-stage startups lacking a solid internal meeting cadence - and it totally shows in their level of engineering, sales, and customer success execution. And that’s a bummer, because it can end up killing your company (or at least dragging on your growth).

Meetings are important for your company. Get over yourself.

To help with this, I wrote up this reference architecture to share with some of the companies I’ve invested in and advise, so they can jump forward on that learning curve, and have an intentional, efficient, set of meetings with which to run their organizations. Your company might get value out of it too. This is the Google Docs version.

“Pllleeeaassseee no moar resumes….” This post originally ran on First Round Capital’s First Round Review. It was inspired by Nick Soman Other early stage recruiting posts here When you run a recruiting software company, you end up... Continue →